May is Asian American and Pacific Islander Heritage Month

May is Asian American and Pacific Islander Heritage Month, and we wanted to highlight children and young adult books written by AAPI authors. Diversifying your home library is a wonderful way to start conversations with your children about different cultures. Visit your local library or purchase books at your favorite local bookstore to find these and more by AAPI authors. 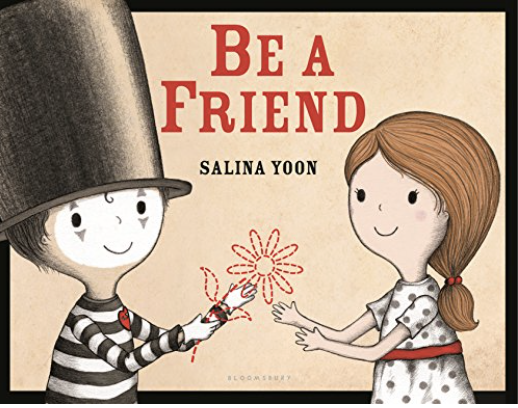 Be a Friend
By Salina Yoon

From the publisher: From the beloved author/illustrator of the Penguin and Bear series comes a heartwarming story of self-acceptance, courage, and unbreakable friendship for anyone who has ever felt "different." Dennis is an ordinary boy who expresses himself in extraordinary ways. Some children do show-and-tell. Dennis mimes his. Some children climb trees. Dennis is happy to BE a tree... But being a mime can be lonely. It isn't until Dennis meets a girl named Joy that he discovers the power of friendship—and how special he truly is!

Eyes That Kiss in the Corners
By Joanna Ho, illustrated by Dung Ho

From the publisher:  A young Asian girl notices that her eyes look different from her peers'. They have big, round eyes and long lashes. She realizes that her eyes are like her mother’s, her grandmother's, and her little sister's. They have eyes that kiss in the corners and glow like warm tea, crinkle into crescent moons, and are filled with stories of the past and hope for the future. Drawing from the strength of these powerful women in her life, she recognizes her own beauty and discovers a path to self-love and empowerment. This powerful, poetic picture book will resonate with readers of all ages. 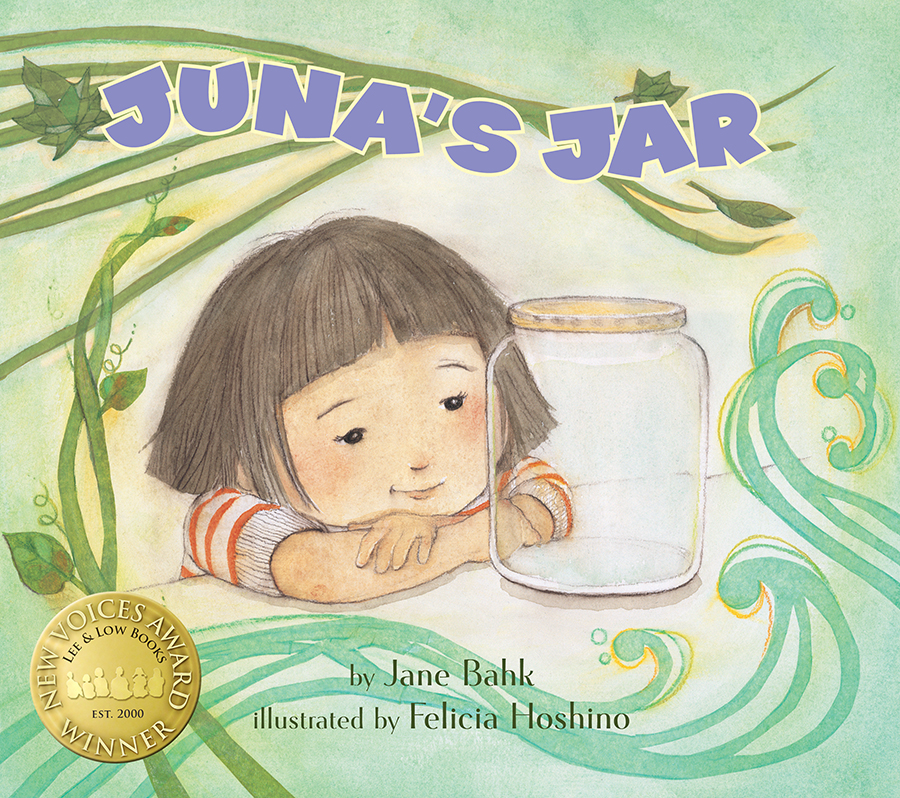 From the publisher: Juna and her best friend, Hector, love to go on adventures in the park, collecting things to put in Juna’s empty kimchi jars. But then one day Hector unexpectedly moves away, and Juna is left wondering who will play with her. With the help of her special jar, Juna searches for her friend the world over. What Juna finds is that adventure—and new friends—can be found in the most unexpected places. 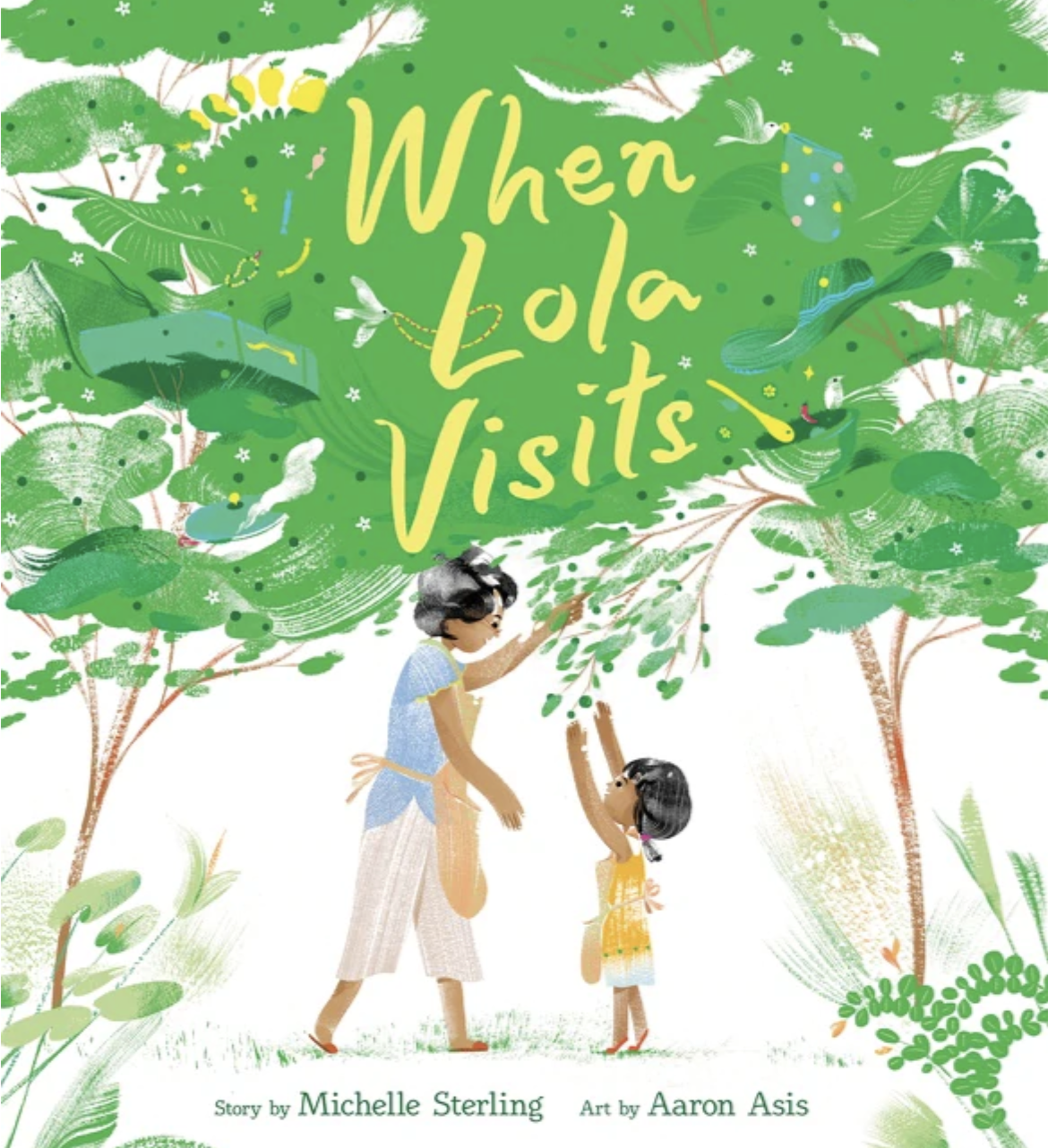 When Lola Visits
By Michelle Sterling

From the publisher: For one young girl, summer is the season of no school, of days spent at the pool, and of picking golden limes off the trees. But summer doesn’t start until her lola—her grandmother from the Philippines—comes for her annual visit. 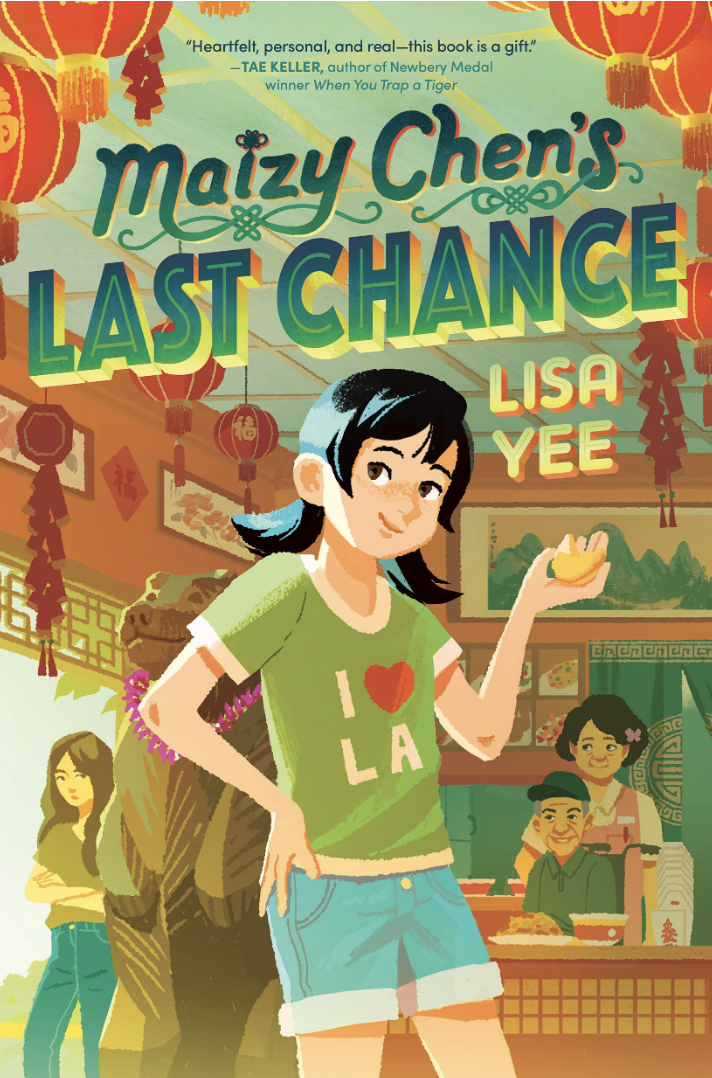 From the publisher: Maizy has never been to Last Chance, Minnesota... until now. Her mom’s plan is just to stay for a couple of weeks until her grandfather gets better. But plans change, and as Maizy spends more time in Last Chance (where she and her family are the only Asian Americans) and at the Golden Palace—the restaurant that’s been in her family for generations—she makes some discoveries. ... But the more Maizy discovers, the more questions she has. Like, why are her mom and her grandmother always fighting? Who are the people in the photographs on the office wall? And when she discovers that a beloved family treasure has gone missing—and someone has left a racist note—Maizy decides it’s time to find the answers. 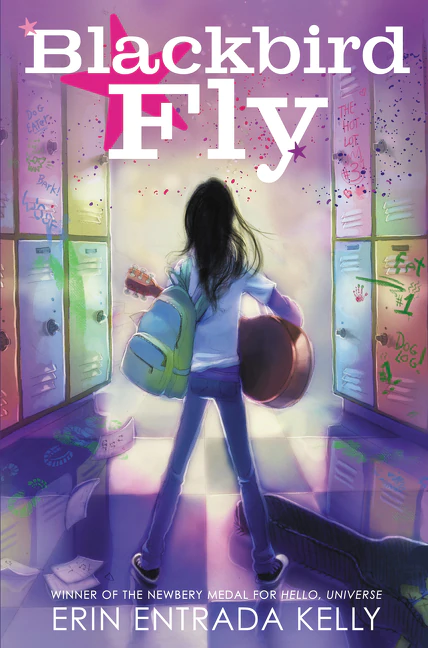 From the publisher: Apple has always felt a little different from her classmates. She and her mother moved to Louisiana from the Philippines when she was little, and her mother still cooks Filipino foods and chastises Apple for becoming “too American.” When Apple’s friends turn on her and everything about her life starts to seem weird and embarrassing, Apple turns to music. If she can just save enough to buy a guitar and learn to play, maybe she can change herself. It might be the music that saves her... or it might be her two new friends, who show her how special she really is. Erin Entrada Kelly deftly brings Apple’s conflicted emotions to the page in her debut novel about family, friendship, popularity, and going your own way. 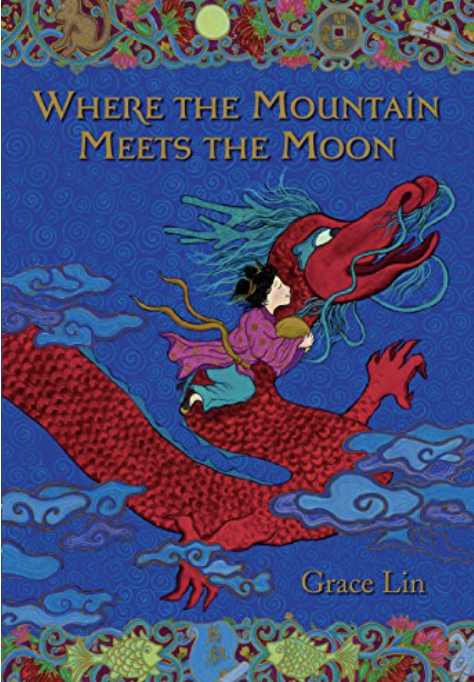 Where the Mountain Meets the Moon
By Grace Lin

From the publisher: In the valley of Fruitless mountain, a young girl named Minli lives in a ramshackle hut with her parents. In the evenings, her father regales her with old folktales of the Jade Dragon and the Old Man on the Moon, who knows the answers to all of life's questions. Inspired by these stories, Minli sets off on an extraordinary journey to find the Old Man on the Moon to ask him how she can change her family's fortune. She encounters an assorted cast of characters and magical creatures along the way, including a dragon who accompanies her on her quest for the ultimate answer. 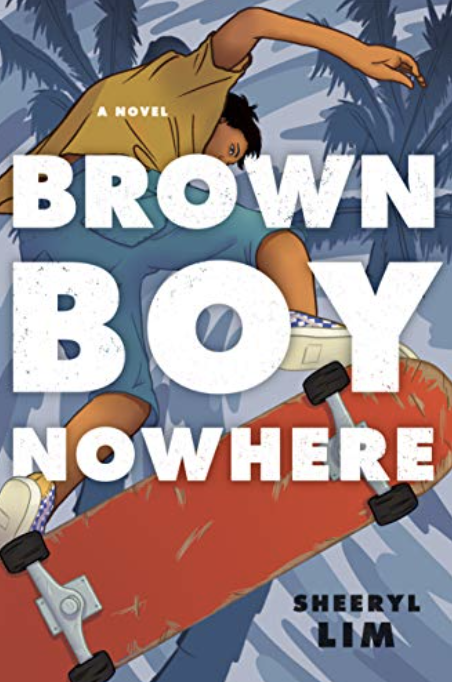 From the publisher: What’s the problem? Sixteen-year-old Filipino American Angelo Rivera will tell you flat out. Life sucks. He’s been uprooted from his San Diego home to a boring landlocked town in the middle of nowhere. Behind him, were ocean waves, his girlfriend, and the biggest skateboarding competition on the California coast. Ahead, flipping burgers at his parents’ new diner and, as the only Asian in his all-white school, being trolled as “brown boy” by small-minded, thick-necked jocks.

Resigned to being an outcast, Angelo isn’t alone. Kirsten, a crushable ex-cheerleader and graffiti artist, and Larry, a self-proclaimed invisible band geek, recognize a fellow outsiders. Soon enough, Angelo finds himself the leader of their group of misfits. They may be low on the high school food chain, but they’re determined to hold their own.

Between shifts at the diner, dodging bullies, and wishing for home, Angelo discovers this might be nowhere after all. Sharing it can turn it into somewhere in a heartbeat. 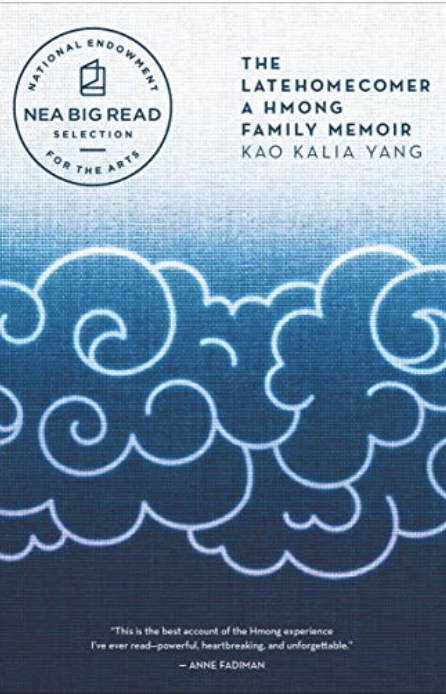 The Latehomecomer: A Hmong Family Memoir
By Kao Kalia Yang

From the publisher: Yang’s award-winning memoir of her family’s harrowing escape from war in Laos is a love letter to her grandmother, a troubling portrait of the consequences of U.S. intervention in Southeast Asia, and a glimpse into the little-seen exodus of the Hmong people, first to refugee camps in Thailand and then, for many, to new homes in Minnesota. 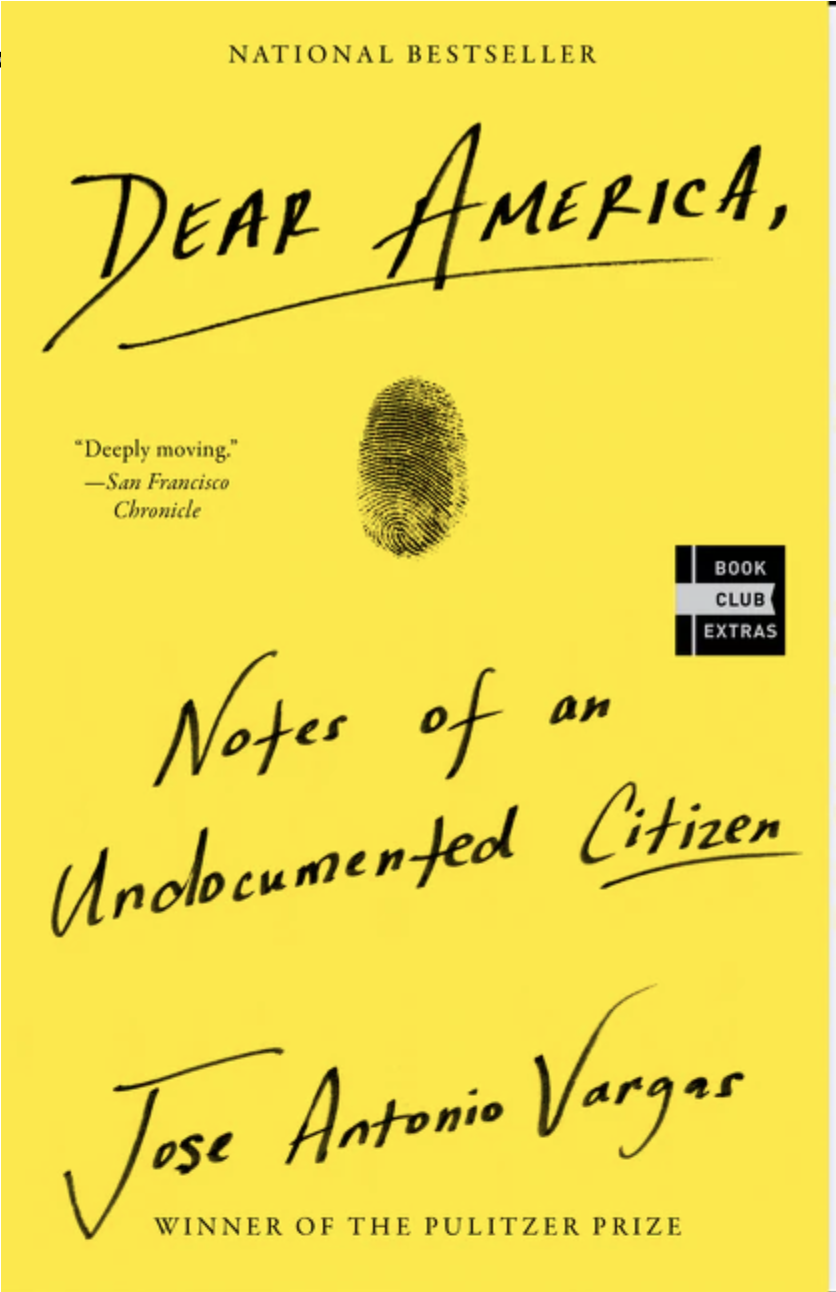 From the back cover of the Pulitzer Prize-winning book: My name is Jose Antonio Vargas. I was born in the Philippines. When I was twelve, my mother sent me to the United States to live with her parents. While applying for a driver’s permit, I found out my papers were fake. More than two decades later, I am still here illegally, with no clear path to American citizenship. To some people, I am the “most famous illegal” in America. In my mind, I am only one of an estimated 11 million human beings whose uncertain fate is under threat in a country I call my home.

This is not a book about the politics of immigration. This book—at its core—is not about immigration at all. This book is about homelessness, not in a traditional sense, but about the unsettled, unmoored psychological state in which undocumented immigrants like me find themselves. This book is about lying and being forced to lie to get by; about passing as an American and as a contributing citizen; about families, keeping them together, and having to make new ones when you can’t. This book is about what it means to not have a home.